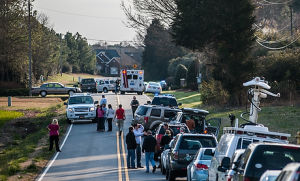 I spoke at a “board member boot camp” Tuesday night to give legal tips to new homeowners association board members, and briefly touched on security and safety issues for board members. Luckily, I said, homeowner violence against HOA board members is very rare, and I am not aware of any in our area since I’ve been practicing law. Then on Friday, a Harrisburg, N.C. man apparently killed two HOA board members and himself in a dispute over tree removal. Read the article here: http://www.hickoryrecord.com/independent_tribune/news/article_de356028-98d2-11e2-a47e-0019bb30f31a.html

There are no life-and-death HOA decisions. While it is a reality that HOAs are communities, and as with any community, there are occasional disagreements and occasionally members who may be mentally unbalanced, HOA disagreements need not become disagreeable. How can HOAs contend with these realities while still enforcing their rules and regulations? Here are ten tips:

1. Foster a sense of community. Disagreements are much less likely to escalate in HOAs with a strong sense of community. HOA-sponsored cookouts, movie nights, and even clean-out-your-garage days (where the HOA hires a junk removal company and members can take large unneeded items to the curb) help neighbors get to know each other and build up a level of trust.

2. Be open and communicative. HOAs should over-communicate and over-meet. When members feel aware of what is going on and have had a chance to participate in the decision-making process, they are less likely to take personal offense at a decision with which they disagree.

3. Be willing to compromise. Again, there are no life-and-death HOA decisions. HOA board members should be reasonable in their demands and prepared to compromise when conflict arises.

4. Don’t perpetuate a culture of conflict. At times a board member with a take-charge, take-no-prisoners attitude may be elected. While such traits can be great in business, such a person may not be best suited for a leadership role with an HOA. Strong personalities can be lighting rods for conflict, especially when the member on the other side of a conflict also has a strong personality. Boards should have a culture of reasonableness and understanding. If a dispute appears to be escalating, the board should consider changing the individual board member(s) involved to try to defuse what oftentimes is largely a personality clash.

5. Rely on experienced advisors. Only the smallest HOAs should do without professional management. Professional HOA managers and lawyers have the experience to recognize and defuse potentially dangerous situations.

6. HOAs are not police forces. HOAs are created to maintain property values and common properties – not to be a police force for the neighborhood or to resolve conflicts among neighbors. Board members should remove themselves from volatile situations. If there are concerns about personal safety or laws being broken, law enforcement should be called without hesitation.

7. Be prepared. For meetings involving controversial subjects, it is always worth the cost to have an on- or off-duty police officer present in uniform. Smart HOAs appoint safety committees whose members may receive training in recognizing dangerous situations.

8. Don’t go it alone. A board member should never go alone to meet with a homeowners if conflict could arise. There is strength and safety in numbers.

9. Meet at neutral territory. Meetings involving controversial matters should be held in public places where there is a natural inclination for people to be better behaved – not at the disgruntled member’s home, for example.

10. Keep records of adversarial or violent interactions. Usually, although not always, there are past clues foretelling an individual’s future violence. The HOA should keep records of any violent or threatening interactions with members; these records could be useful in police investigations later or if a restraining order needs to be obtained.

The tragedy of homeowner violence is made even worse if good board members become reluctant to serve for fear of their personal safety. I certainly hope it does not come to that, and that I can continue to tell my HOAs that violence against HOA board members is a rarity.

UPDATE (4-2-2013): I was contacted yesterday by a lawyer who is a friend of mine and an officer of the HOA where the incident occurred. She assured me that this was not, in fact, an HOA-related incident, but apparently simply a dispute among neighbors that had nothing to do with anything HOA-related. Nonetheless, the above tips are good advice for all HOAs.

For more information, visit us at www.HOANinjas.com.
Posted by zacharymoretz at 8:43 PM